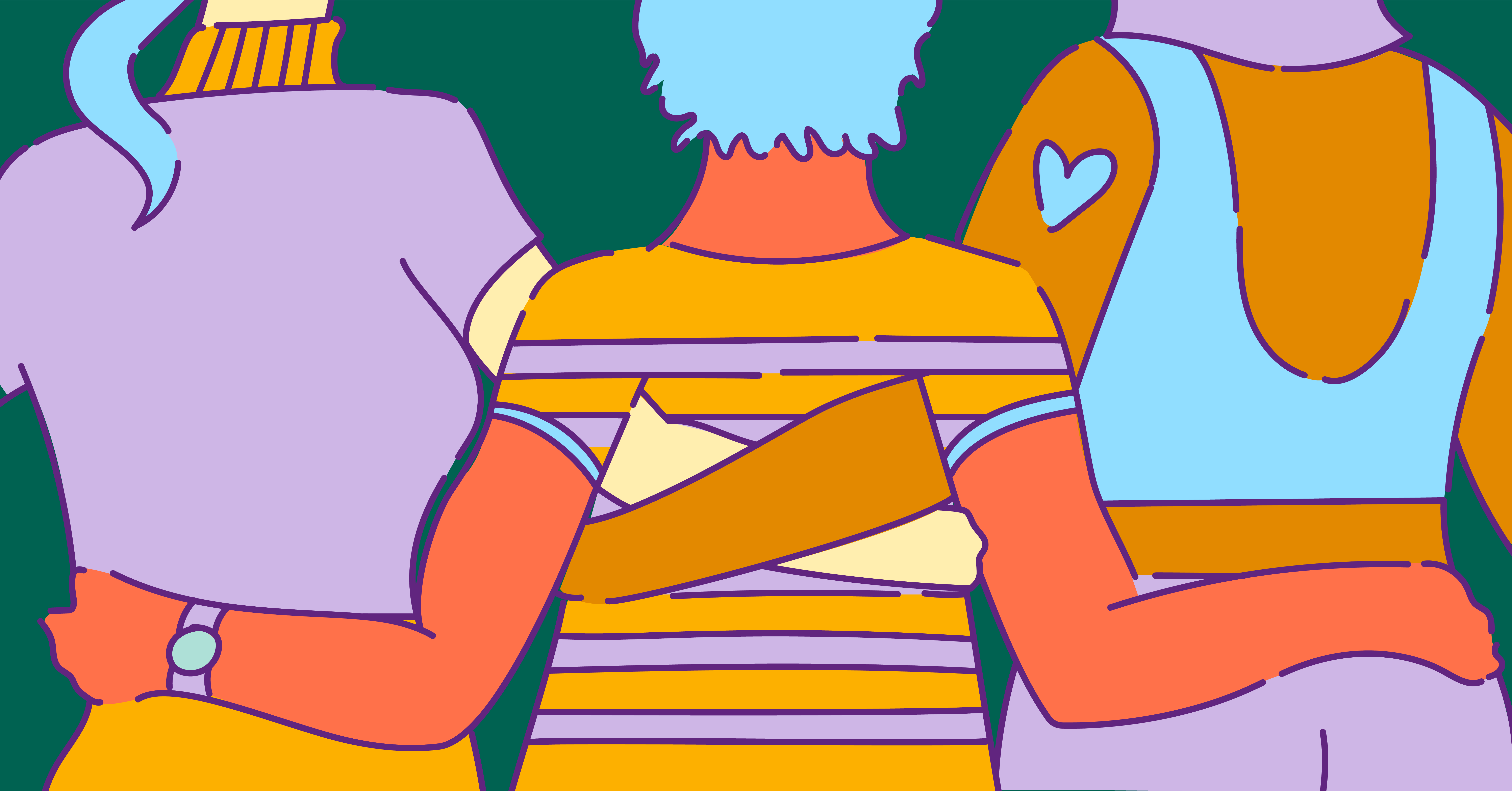 Ethical non-monogamy (abbreviated as ENM for those in the know) describes the practice of having more than one sexual partner, although the “ethical” part is used to differentiate it from cheating. It’s also sometimes called consensual non-monogamy or sometimes just plain ol’ open relationships. But how maddeningly open-ended is that?

Although it’s super common for people in the same relationship to prefer different terms to describe it (one man’s triad is another man’s swinging), it helps to understand the terms surrounding non-monogamous relationships. So while this is by no means exhaustive, here’s a handy field guide to the language of non-monogamy.

Combining the Greek and Latin roots for “many” “loves,” polyamory is a relationship model built on the idea of having romantic love with more than one person.

Polyamorous people reject the idea of having “one true love” at the expense of all others and craft their lives with the hope of finding more than one partner to have genuine, romantic love with.

But we can’t just define polyamory as the opposite of monogamy— there’s a whole array of different ways people describe their relationships. Read on, and we’ll go into some of the more common subtypes you’ll run into.

This tends to be the one that’s easiest for people to grasp. You have a couple, either married or in a long-term relationship, who decide to embark on the journey of polyamory together.

But the hierarchical polyamorous couple is open and transparent that they are each other’s priorities and that their relationship comes first. This relationship is called the Primary.

Obviously, if someone can’t handle the jealousy, this gets real toxic real quick.

Generally, many people won’t really identify as hierarchical poly; it’s usually a term that enters the conversation when something has gone wrong. That isn’t to say the model is flawed, but in a healthy, functional hierarchical poly relationship, the hierarchies will seldom come up.

The exact polar opposite of Hierarchical Polyamory is Solo Polyamory. Solo Poly folks don’t need or want a primary partner, and many describe themselves as their primary relationship. Often, solo polyamorists prefer to live alone or in a way that they’re not cohabitating with one partner long-term.

This doesn’t mean that a solo poly person is dismissive of feelings or has trouble connecting more than another relationship model. It just means that they don’t want to live in the assumption that they’ll follow the timeline and milestones of a traditional relationship.

When you say “polyamory” to most people, the throuple or triad is the image most people will have in mind. In a traditional triad, all partners are in a romantic and sexual relationship with each other.

The closed V is a handy way of describing the dynamics of a polyamorous relationship where two people share a romantic and sexual connection with the third, but not to each other. Make sense?

The third person who is involved with both people is sometimes called “the hinge of the V.” (Think of it as a family tree chart, it’ll make more sense that way.) And since the two “legs” (lines? Whatever you wanna call them!) of the V don’t connect together, it doesn’t make a triangle. Hence, no triad. I failed geometry.

It can at first appear to be splitting hairs between what’s a regular polyamorous relationship and what’s a closed V. But there is a distinction!

A closed V is generally used when both partners have a decent level of closeness otherwise but aren’t sexually involved.

This generally comes up when all three partners live together but don’t operate as a triad.

A quad is genuinely a free-for-all. Four people maintain some kind of romantic and sexual connection, but it’s not necessarily in every configuration.

In fact, it’s fairly common for at least one person in a quad to have a close relationship but not a sexual one, to another person in the group.

So a quad or triad might have elements of hierarchy (for example, two couples who create a quad), and it’s usually assumed that everyone involved is open to see other people as well. Polyfidelity is the outlier.

In polyfidelity (sometimes abbreviated poly-fi), the members of the group function like a closed monogamous couple… just with a different number.

Polyfidelity groups might live together, raise kids together, and adjust their safer sex practices to reflect this closed arrangement. This is often called a polycule, although that term isn’t exclusive (no pun intended) to a polyfidelity arrangement.

As non-monogamy grew in public conversation, there arose a need for a term that wasn’t exactly non-monogamous… but didn’t follow all the strict rules of monogamy either. Monogamish entered the public lexicon in 2011 to describe precisely this.

A monogamish couple is usually monogamous (as far as anyone else knows), but they make allowances for the occasional extra-curricular dalliance.

Sometimes abbreviated as DADT, this means there’s an agreement between primary partners that they’re aware that their partner will be seeking out additional relationships, but they don’t want to have to be confronted with the details of it.

Basically, the other relationship functions like a cheating affair, but with one level of deceit removed.

The two most common situations for DADT are relationships where:

The DADT can definitely veer into strictly-sexual swinging territory, but it also exists as a modernized version of the classical example of early polyamory— think courtesans and mistresses in the days of old.

This is the opposite of the Don’t Ask, Don’t Tell.

Kitchen Table Polyamory gets its name from the idea that it’s the kind of polyamory where everyone involved could sit around the kitchen table with no drama. This includes the partners and the metamours (your partner’s partner that you are not sexually involved with),

It’s less of a particular style of polyamory and more of a flex, but it’s a good one to know.

Swingers, as you likely know, are people who have recreational sex with others but don’t necessarily pursue romantic relationships with them.

While both terms mean the same thing, younger swingers tend to prefer the euphemism “in the lifestyle” to get away from the idea of swinging as being a relic of the 70s, like dusty shag carpet.

While the lack of a love connection differentiates the swingers from the poly folks, this doesn’t mean that swingers don’t form intense social connections with their partners.

Many swingers function in pair bonds (the couple that swings together, stays together), but a significant portion of swingers also go solo and form social connections within their swing scene.

Most often practiced by couples new to the lifestyle, soft swap generally refers to sex with some kind of pre-determined guardrails on it.

The most common agreement is something like “hand jobs and oral are okay, penetrative sex isn’t.” However, the prohibitive rules are unique to every couple.

The term soft-swap indicates some sex acts the couple does together, even in the same room as their new sexual partners, are off-limits to others and need to be respected and negotiated ahead of time.

On the other end of the spectrum, “full swap” generally means that a couple is into experiencing the full gamut of their sexual practices. Although this usually involves stricter safe sex practices in place with a new partner.

This tends to be less common than other forms, but there’s plenty of room at this non-monogamy table, so let’s save a seat for the kinksters.

The term open-relationship encompasses the way that most non-monogamous people really function.

There are both ends of the spectrum:

But a lot of people in open relationships are open-minded to the possibility of developing a love connection while also enjoying casual sex along the way.

Forget the labels. If you want.

Not all relationships can be easily labelled. And that’s okay.

Rather than adjust yourself to fit a label, use the labels to most accurately describe what’s going on in your heart… and maybe your pants. Ethical non-monogamy is about embracing your true self and living authentically, so get out there and see what works for you.

If you're looking to expand your current relationship status, check out our list of the best (and worst) dating apps for non-monogamous folks.

Relationships 101: What Is Ethical Non-Monogamy?

Ethical Non-Monogamy (ENM) is an umbrella term for a love style where folks consent to engage with one or more romantic or sexual partners at a time.

While the majority of Canadian dating apps are geared toward monogamous folks, some are friendlier towards ethical non-monogamy. Here's our review.