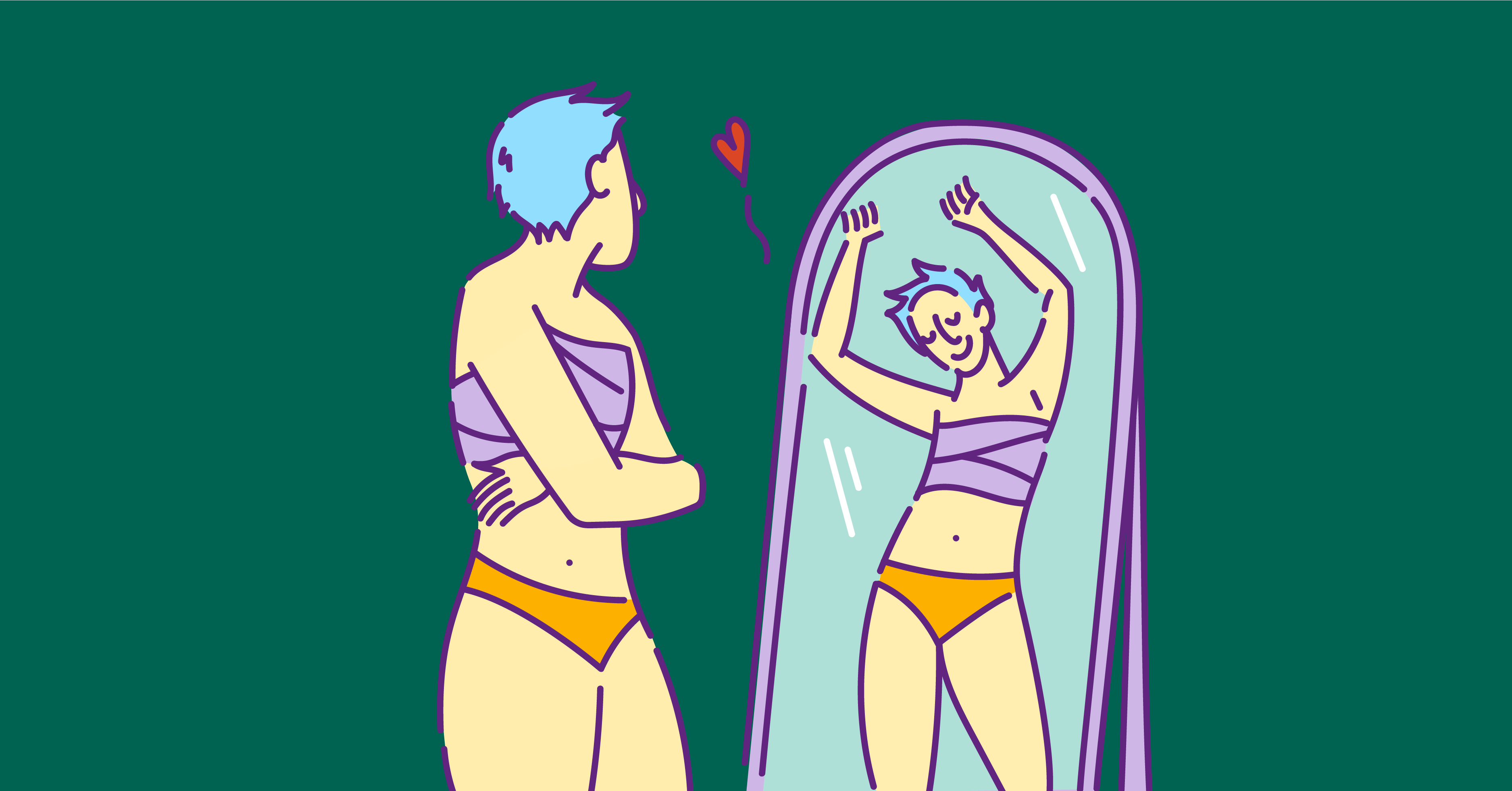 How To Fight Toxic Body Image Views in the LGBTQ+ Community

Within the queer community, it is not uncommon for folks to select “it’s complicated” when it comes to their relationship to their body.

Loving, accepting, and expressing yourself for all you are is easier said than done. Especially when the community that is meant to embrace you for all that you are only does so as long as you fit within strict beauty standards.

Fatphobic and femme-phobic rhetoric within the queer community is a long-standing, read-between-the-lines secret, hidden in plain sight.

Matthew Thomas Conte, a  PhD student in Gender and Sexuality Studies at the University of Toronto, shared his experience navigating the queer scene as a gay, fat, femme male, where, for the first time, he felt his identity was deemed as “wrong, gross, unattractive.” He expressed feeling “devalued and degraded.”

Queer folk who identify as female have a higher chance of body dissatisfaction when compared to heterosexual females.

*It is important to note that the gay/queer community is, of course, not a monolith. Although data is valuable, it can be quite limiting and invisibilize communities not part of these studies.

“No fat/no femmes” is a common phrase thrown around dating apps and the queer scene. It often extends to “no Asian, no blacks,” as if body composition and gender identity weren’t enough to discriminate against.

This intense ‘othering’ of folks who live outside the boundaries of what’s “socially accepted” is complicated to unpack. It has deep ties that go back to the history of queer liberation when queer folks, especially those who presented femme, had to navigate a discriminatory world, where gay folk were not welcomed. They would try to “butch” themselves up in an attempt to convince the heteronormative majority of their “normalcy” by “blending” in.

Then, there is complicated, deep-rooted sexism and misogyny sprinkled in; “rough and tough” muscle men are often valued over the “weaker, softer,” less valued “femininity.”

Femininity and female bodies constantly negotiate with complex policing that reminds them to stay in their lane/“roles.” There are constant reminders that the moment they deviate from this “softness,” they are villains.

Add in a cultural obsession with thin bodies considered “attractive” and “worthy” (aka fatphobia) everywhere you look from basically age 0…and voila! You have a complicated concoction that tells us being fat and/or feminine is wrong.

How can we fight against this narrative?

The irony of “othering” within our minority group is not lost on me, and I am sure many others as well. Like I said, the whole situation is complicated.

To stay constructive and action-driven, let’s try and think of how we can switch up this narrative to be an inclusive one.

In 2017, Landen Zumwalk of popular dating app Grindr stated: “Sexual racism, transphobia, fat and femme shaming and further forms of othering such as stigmatization of HIV positive individuals are pervasive problems in the LGBTQ community. These community issues get brought onto our platform.”

Enter: “Kindr,” an initiative to ban folks who express discriminatory rhetoric on the app. In 2021, the data regarding how many folks have been blocked, or even how safe the platform actually is, remains to be seen. (That fact that there are community policed sites warning of dangerous folks certainly raises an eyebrow, though!)

Grindr continues to say they wish to be a beacon of education for future LGBTQ+ generations to understand how to be inclusive and spread kindness.

A tangible example of a grassroots initiative is Good Night Out Vancouver. Good Night Out is a Vancouver-based society committed to building community response to prevent and respond to sexual harassment and assault in every sector, with a specific focus on hospitality, music, the arts and nightlife.

They have a trained street team that helps ensure the safety of vulnerable groups in Vancouver nightclubs on Fridays and Saturdays from midnight - 3.30 AM and offer training for nightlife, hospitality, and venues to create and respond to safety policies and tools to increase safety for attendees and staff. Programs like these are revolutionary and so important.

It would be amazing to see programs like this mandated in every city across Canada. A 2019 public survey had the following feedback: “Keep the Good Night Out Team, they are visible, positive and promote safety for all. I would recommend expanding the team.”

The library is open

The keyword: education. The value of sharing factual information regarding diverse genders, bodies, abilities, identities, families, and expressions should not be overlooked – and should be considered critical aspects of the academic curriculum and from a young age.

The hope is that this would foster an environment of safety, respect, and acceptance (not just “tolerance”) and raise awareness around unique stigmas, challenges and issues faced by LGBTQ+ past, present, and future.

Accepting wrongdoings and that you hold negative biases is a bold step in the right direction. Re-learning and unlearning social constructs are not easy but necessary.

To read yourself and understand the notions you hold on to certain bodies, ethnicities, gender expressions, etc., and to face them is paramount – and will allow you to hold space for stigmatized and marginalized folk.

Be mindful of who you lean on: trans, BIPOC, disabled folk are exhausted – be aware of what resources you use and what emotional labour you may be imploring by “picking their minds.”

Pick up books by diverse authors, attend conferences, watch documentaries – there are excellent resources at our disposal.

A primary driver of body dissatisfaction is from comparison to other bodies – typically unrealistic, over-edited photos – leading to an internalized idea of a perfect body, regardless of how unreal said images may be. For example, there are 10 million new photographs uploaded to Facebook every hour - so there is no shortage of images bombarding us throughout the day.

Hateful, rude comments and online bullying are almost out of control at this point. Presently, there are few measures to stop “online trolls” from commenting on hurtful things that often focus on body, gender, sexuality, or race shaming.

Positively, last month during the Canadian election, the Liberal Party of Canada leader Justin Trudeau pledged to introduce legislation aimed at precisely this: to fight hate speech and have other harmful posts on social media removed within 24 hrs – within 100 days of forming his government.

This will be a welcomed change, hopefully leading to safer online spaces, with regulations on hate speech and realistic, diverse bodies celebrated.

The pervasive “othering” of folks who don’t fit into this made-up ideal (aka not skinny, too outside the gender binary, or not white) is simply creating further ostracization within the queer community, so where are we meant to go?

Humans crave acceptance to feel heard, appreciated and understood. The solution is as complicated as anything, but it’s clear that more stigmas will simply continue to create distance.

We do know that little actions go a long way! If you live outside Vancouver, why not create a “Good Night Out” branch in your city or town? Follow up with the government of Canada and ensure these policies they promise are followed through with.

Or, you can volunteer your time for different queer initiatives:

We may not have all the answers, but more voices, experiences and thoughts lead to the most creative and exceptional solutions! Make sure your voice and actions on the side that uplifts our community, not with those that may try to tear us down.

The "F" Word: Tips for Loving Your Fat Partner

If your sexual/romantic partner is fat, below are some suggestions on how to best support them and words/actions you’re better off avoiding.

8 Ways to Be Kinder to Yourself During Weight Change

The average adult’s weight changes between 2 to 6 pounds every day. It’s a normal occurrence. Here are 8 ways to self-care during weight change.