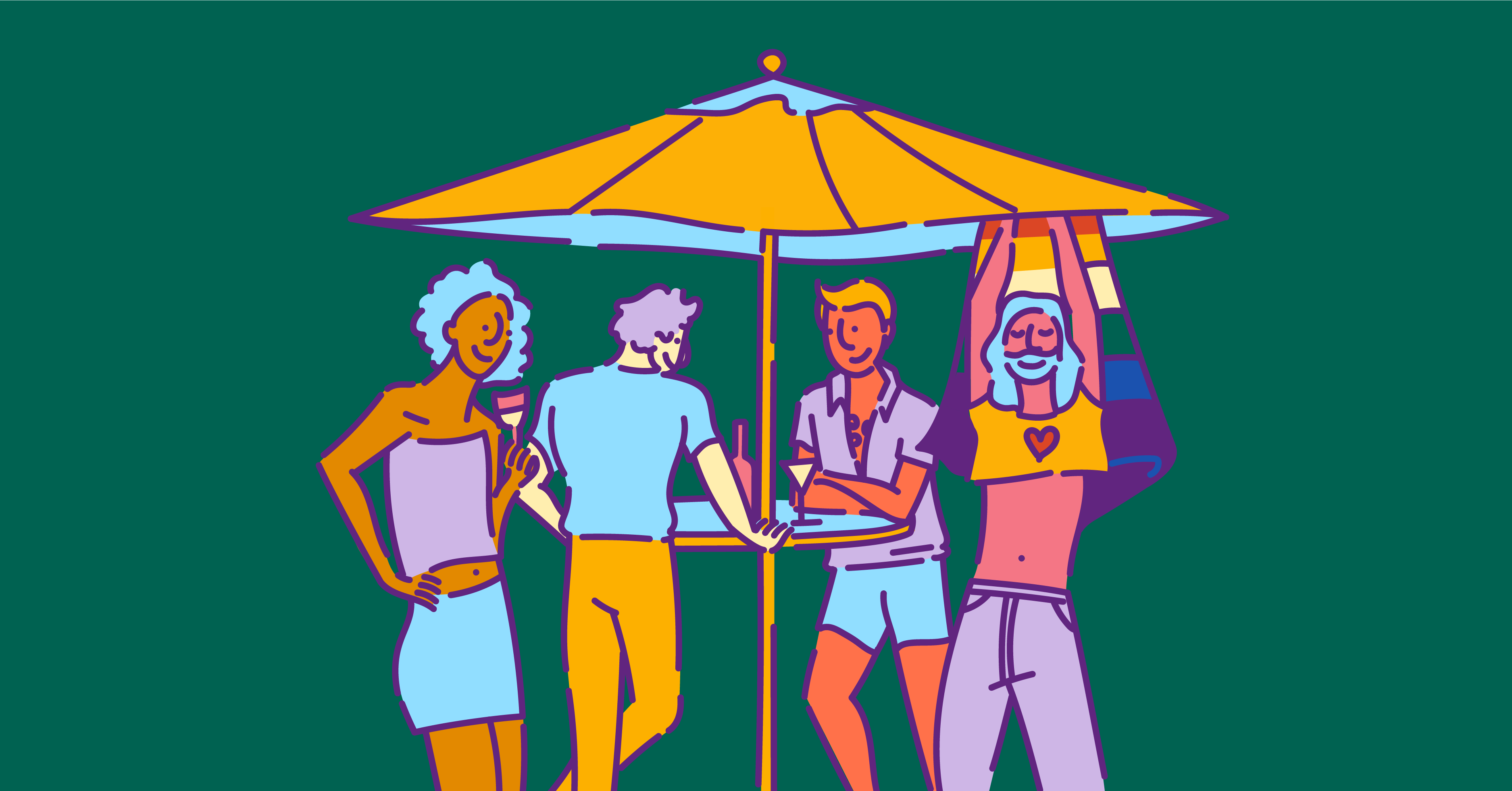 Gay Bars 101: What You Should Know Before Going to a Gay Bar

So, there you are:

There’s this bar downtown you’ve heard about, and you decide to give it a shot. You shave, shower, brush your teeth, throw together the cutest outfit you can find, and hop in an Uber on your way to this new experience that has your heart beating just a bit faster.

You walk through the doors, a smile spreads across your face, and you tell yourself, “This is going to be an interesting night.”

A safe space for us all

The bar is filled with people:

Let’s not forget the 75-year-old man who just strutted by you wearing a leather newsboy cap, a tight leather vest exposing a bush of gray hair on his chest, and a pair of assless leather chaps, which reveal his deathly pale, but round bum.

While the initial sights are overwhelming, a bit comical, and breathtaking, there’s something more to this experience that touches you: Every person in this bar feels comfortable to be who they are.

No matter the drag queen, leather-wearing 70-year olds, 20-something twinks, or the shirtless bartender, you realize that what ties these people together is the sense that they can be themselves in this space without fear of judgement or violence.

That is the oasis a gay bar provides in a desert filled with homophobia, transphobia, intolerance, bigotry, violence, and fear. Within the walls of a gay bar, differences in gender expression and sexual orientation are not taboo. Rather, they are worthy of celebration—and not the festival that the LGBTQS+ community gets every June for one month.

This is a space that is always welcoming. No judgements, no stares, and no fear of being trounced upon, called a name, arrested, or assaulted.

Gay bars indeed offer a place for queer folks to congregate, imbibe, socialize, build new relationships, and reinforce our sense of community and togetherness in the face of a world that often treats many of us like misfits. For example, you might go to a crowded gay bar and meet a hot hookup, someone you spend the night with, have an enjoyable evening, and live out your sexual freedom.

Or, you could go to a gay bar and meet Mr. Right. You lock eyes from across the room, smile at each other, strike up a conversation, and end up spending the rest of your lives together. Or, you could just end up making a good friend. How many of us have met someone at a bar, gone out on a date, felt no romantic chemistry, but maintained a friendship that has grown richer and deeper every year?

And while gay bars have their appeal, they’re not perfect. Trans people, people of colour, people with disabilities, women and femme-identified people—basically anyone who isn’t a white, cisgender male—have all experienced discomfort in gay bars. While these bars are supposed to be open and affirming, many times they miss the mark.

Our society privileges white, cisgender male identities and gay bars can sometimes be a place where many gay men create a hostile vibe by adhering to heteronormative rules. For example, a non-binary, trans person may feel out-of-place in a gay bar with the two partners they’re in a polyamorous relationship with.

It’s a sad fact but true: LGBTQS+ spaces are supposed to be for all of us, but they often only cater to gay white cisgender men. The rest of us be damned. That’s no reason not to go to a gay bar, however.

Think about it: Every single movement for change in history started with a group of people who wanted to be disruptive. Yes, gay bars cater to the gay, cisgender white male, but those of us who don’t fit into that category can perform a small but revolutionary act: show up, take a seat, and live our truths. Gay bars are still places that can be transformed through the radical act of exercising our right to be there and exist!

Time, activism, and social progress have made things easier for LGBTQS+ people to come together and celebrate one another in shared spaces. But even within those spaces, certain implicit social rules guide our interactions—and keep us safe.

Ways of being in the bar

While gay bars are a great way of connecting with others who share your identity, it’s vitally important that you live out your identity in a way that is consensual, safe, and affirms your personhood. Here are some tips for stepping into the gay bar culture.

Gay bars are a great way to meet people, build friendships, and even find a partner (or a plain old-fashioned hookup). But be careful. Like many other night-spaces, there are predators out there. Don’t leave your drink alone with a stranger and if someone buys you a drink, make sure you’re taking it directly from the bartender or server.

Unfortunately, in some cases, there may be predators out there wanting to use these bars to find victims. Try to go to gay bars with friends, people you trust, and routinely check in with them about how they plan on getting home.

Be mindful of your alcohol/drug consumption

Bars are places of conviviality, spaces where we get to let our hair down and have a bit of fun. But, have safe fun. Drinking to excess could lead to alcohol poisoning, drunk driving, or otherwise less safe behaviour.

If you want to get drunk or high, do so in the company of friends, people who can be there for you and help keep you safe. Also, it goes without saying, but hand your car keys over to someone responsible or plan to take a cab or Uber home.

If you’re on the prowl for some late-night loving, make sure to bring condoms, some small packets of lube, and make plans, so you don’t forget your PrEP. We all tend to make riskier decisions when we’ve been drinking and our inhibitions are lower. Know yourself and know what you’re looking for in a casual encounter and keep some protection on you to safeguard against sexually transmitted infections.

If you've been worried about the minimal side effects of PrEP in the past, Descovy as PrEP might be worth your consideration given it has even fewer reported side effects.

Go with your gut

Maybe you’re having a conversation with a hot person, but there’s something about them that’s off. Perhaps it’s your first time visiting a gay bar, and you’re deeply uncomfortable or nervous as it’s a new experience. Or, maybe you’ve had one too many martinis, and you feel like you might be sick.

Whatever the situation, follow your instincts. If that person seems a little too friendly and you don’t want to lead them on, if you know that one more martini will make you throw up, or if you feel like you need to enter into the gay “scene” in baby steps, go with what you’re feeling.

Trust your instincts enough to pull you out of a situation that may make you uncomfortable. Politely excuse yourself from that hottie and go mingle with other people, or just hang out alone.

Whatever the situation, if your feelings are telling you something, listen.

Condoms 101: How To Pick the Correct Condom Size

When it comes to condoms, size does matter. If a condom is too loose, it risks sliding off. Too tight & it risks leaving the user with discomfort.

What Are Cock Rings & How Do You Use Them?

A cock ring is a cylindrical device that you insert your penis into & the pressure it applies at the base of the penis helps an erection last longer.