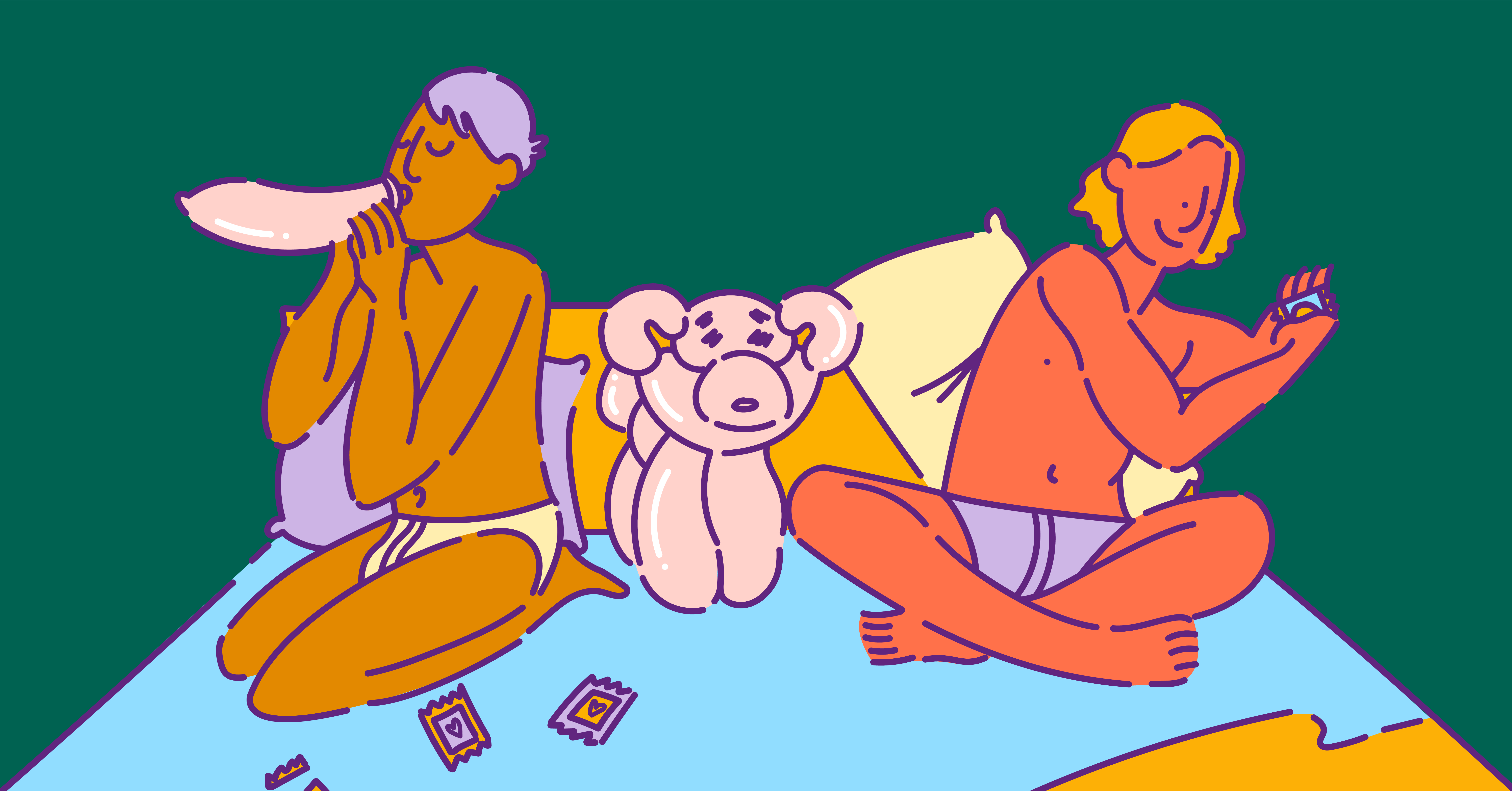 ‍Sex education: we hear a lot about it over our lifetime, from so many sources and mediums and rarely from a queer perspective, so of course it’s confusing! From preaching abstinence to embarrassing banana condom demonstrations, it’s time to break down some common myths about condom use, their capabilities, and how to feel confident in getting it right 100% of the time.

Condoms, aka the penis pouch, are an incredibly protective and valuable tool. Using a condom every time you have any type of sex is the number one way to reduce your chance of getting or passing sexually transmitted infections (STI), including HIV.

Condoms block bodily fluids from reaching you and prevent STIs such as chlamydia, syphilis, and gonorrhea. Though it should be noted that condoms don’t always cover infected areas, and other tools like dental dams should be considered.

What types of condoms are there?

There are two main types of condoms: external and internal. All are non-reusable. Some extra fun condoms are even flavoured, studded, ribbed, shaped, and range in size. This isn’t to confuse you; oppositely, they boast “enhancing the sexual pleasure of you or partner.” Just be sure to read the package, so you know what you’re getting into. Plain old condoms are a great place to start.

To put these bad boys to use, they must be used correctly every time you use them. Putting on condoms can be sexy if you add them into your foreplay and communicate throughout. Most times, a condom’s failure to work is due to inconsistent or incorrect use.

Carefully remove the condom from the package so you don’t tear anything. The condom goes onto the tip of the penis/toy, with the condom rim rolling outwards (you’ll know if it’s the wrong way because it won’t roll down). If you tried it on the wrong side, pick a new condom to try again.

Gently pinch the tip of the condom to rid of any air and make room for the impending semen. Then, roll away.

When you finished doin’ it, hold onto the base of the condom to ensure nothing leaks, and softly remove it. You can then dispose of the condom after checking it for any rips or tears. Remove the condom while still erect so there’s no fluid leak.

Gently remove the internal condom from its package so you don’t tear anything (don’t use your teeth, as this can increase the risk of tearing the condom). Examine it: the thick inner ring with the closed-end is the back or end. The thin outer ring will stay outside the body, around the anus, vaginal, or frontal opening.

Squeeze together the thick inner ring together with your thumb and forefinger and insert gently into you. Get into a comfortable position and add lube onto the end.

Using your finger, gently guide the condom inside yourself, ensuring the outer ring is at least an inch on the outside. Ensure it is not twisted and that you can remove your fingers.

After sex, you can twist the outer ring until the condom is removed. You can then dispose of the condom.

There are many places to locate condoms! You don’t need a prescription for condoms, so you can buy them in drugstores, sex shops, online, or even nab some from the rare washroom vending machine. They are usually no more than around $6/pack.

You can also score free ones from::

To stay on the defense from common STI’s including trichomoniasis, chlamydia, herpes, and HIV, condom use is the most commonly used method.

You will want to be mindful if you are having casual sex or have multiple partners, but condom use in monogamous relationships can be beneficial too. That is because monogamy doesn’t cancel out STI risk. Plus, some STI symptoms are incredibly sneaky and can easily not show any signs.

Condoms are great when using toys to protect from STIs, too.

My partner doesn’t want to wear a condom. What should I do?

Communication and setting boundaries are key when discussing the use of condoms with a partner(s). If your partner(s) are adamantly against condoms, and you aren’t, then it’s a good time to assert your boundaries & communicate what you’re comfortable doing with/without a condom.

My partner says they are too “well endowed” to fit into a condom.

The good news, condoms come in all sorts of sizes! This includes XL and XS. Hehe. If a condom is at all uncomfortable, it likely isn’t the right fit. If a condom is too small, it has a higher chance of breaking; or slipping off if it’s too big. You can measure yourself to ensure you have a condom that fits well to avoid this.

Sex doesn’t feel as good with a condom.

Condoms can do anything these days, i.e., tingling lubrication, flavouring, or ribbed, that is designed specially to make the act more pleasurable for everyone involved. It can increase trust, bonding and overall pleasure.

Further, you can slip on a thinner condom to retain most of the sensitivity. When your mind is in the moment and not worried about catching something unwanted, you’ll be liberated to enjoy the moment.

If you'd like to read more, check out our article on condomless sex & the problem with stealthing.

The condom broke. Now what?

Despite your best effort, condom breaks do happen. If it breaks during sex, you should stop immediately and assess.

If you or your partner can get pregnant and you don’t wish to and are not on another type of contraceptive, you may want to consider an emergency contraceptive aka PlanB, NextChoice or MyWay, which you can get from a pharmacy. They’re most effective within 5 days.

If you believe you were exposed or your partner has disclosed a positive, detectable HIV status, you can use post-exposure prophylaxis (PEP). You will have to start taking PEP within 72 hours of potential exposure for it to do its job, so head to a sexual clinic or your healthcare provider within the time frame. You will need to continue its usage for 28 days, around one month, to be effective.

Once 72 hours have passed, you can book an HIV test to confirm your status and a follow-up three months later. If you’re feeling anxious, you should ask for resources from your doctor/sexual health nurses for counselling support.

If condom breakage causes anxiety, consider looking into the daily pill PrEP, which can reduce HIV transmission risk by up to 99%. If you're looking for PrEP in Canada with an even lower amount of potential side effects (already minimal with Truvada), Descovy might be worth consideration.

Research reassures us that when used consistently and correctly, condoms are strong protection against HIV, especially when partnered with pre-exposure prophylaxis (PrEP). PrEP is an antiretroviral drug that HIV-negative folks can take to protect themselves from contracting HIV.

Of course, research will never be as completely accurate as real-life situations due to folks using condoms inconsistently or incorrectly.

For HIV-positive folks, taking effective HIV treatment or antiretroviral therapy (ART) will help you stay healthy. It can take up to six months of consistent ART use for best results. ART works well, resulting in an “undetectable viral load,” meaning that doctors do not detect HIV in the bloodstream.

When someone has an undetectable load, this risk of HIV transmission is zero – but condoms provide additional benefits against other STIs.

When it comes to condoms, the lambskin condoms do not prevent HIV due to their porous material. Further, some condoms have spermicide on them, which essentially kills sperm; however, spermicide can irritate the rectum or vaginal lining, which can increase your risk of contracting STIs. For that reason, it’s wise to stick to latex or polyurethane condoms. To quote the World Health Organization, “The male latex condom is the single, most efficient, available technology to reduce the sexual transmission of HIV and other sexually transmitted infections.”

Let’s wrap it up

Condoms are an integral part of your sexual health and are an easy (almost) foolproof way to stay safe. Your sexual health is a priority, so don’t shy away from speaking to a professional if you have questions.